This is a brief report by DoctorX and his Chemical Brothers and Sisters covering available information about risks of N Ethyl-Pentylone, a novel and dangerous NPS recently detected as adulterant of MDMA pills and powders. Last month our Drug Checking Service detected two different pills offered as MDMA but contained the cathinone derivative N-Ethyl-Pentylone instead. Both pills were detected in Balearic Islands: 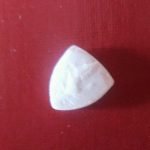 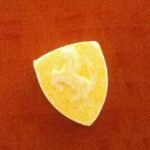 Pills are shield-shaped, divisible x2, with a horse logo (Ferrari). Colour is white in one case, yellow in the other. Recently, N-Ethyl-Pentylone has been also detected in Balearic Islands sold as MDMA powder. In this brief report we present:

N-Ethyl-Pentylone (ephylone, bk-EBDP) is a substituted cathinone and stimulant drug. It is chemically related to methylone and butylone.

First reports about availability and personal experiences of psychonauts with N-Ethyl-Pentylone appear in forums as bluelight.org or drugs-forum.com by mid-2015. Users refer potent stimulant effects with low dosages.. There are no available animal or human experiments using N-Ethyl Pentylone. Both in Europe and US, its presence in recreational market, was first reported in 2016 (1,2). The same year, Slovenia communicated the first death linked to this substance(2). In the last two years, there have been several reports of severe toxicity and death related to N-Ethyl Pentylone in South Africa (3), United States (4,5), United Kingdom (6) and New Zealand (7). Mass-casualty or high toxicity incidents related with unintended use of N-Ethyl Pentylone offered as MDMA are common in these reports. The largest serie of cases involves 26 severe toxicity or death cases (5), collected in a 1 year period in United States. Nevertheless, causes of death included not only intoxication with N-Ethyl-Pentylone, but also suicide, polyintoxications, gunshot wounds, and traffic accidents. In any case, harm potential of this substance appears to be higher than other common recreational drugs. One possible cause for this is the high potency per weight of BK-EBDP. Similarly to MDPV, the fact that a normal dose of the substance is significantly lower than the substance it is being sold as (BK-EBDP sold as MDMA), it is possible that users are ingesting high doses of BK-EBDP thinking it is MDMA, and as a consequence experiencing severe adverse effects. N-Ethyl-Pentylone reaction to Marquis test is a yellow color. This allows to distinguish it from MDMA or other substances. Interpretation is limited in the case of a sample containing a mixture of different substances.

2.- Presence in Drug Market and trends of N-Ethyl-Pentylone

Our database shows these results for N-Ethyl-Pentylone, in the period June 2014- Feb 2018. 4 samples (3 in 2016, 1 in 2017) have been submitted for drug checking as “N Ethyl-Pentylone”. In all 4 (100%) this substance was detected with no other adulterants. All samples came in powder/crystal form and were probably purchased as NPS. In 16 additional samples a test result of N-Ethyl-Pentylone was found, although were acquired as other substance (or had an unknown composition, as refered by the user). Data available are shown in Figures 1,2 and Table 1 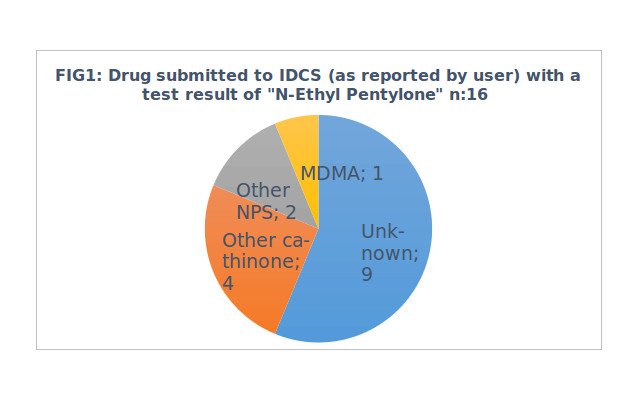 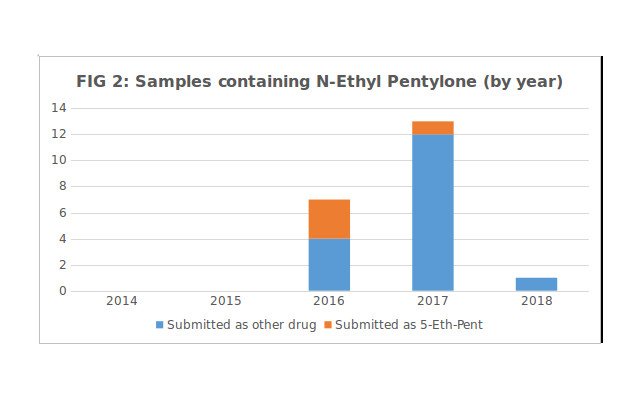 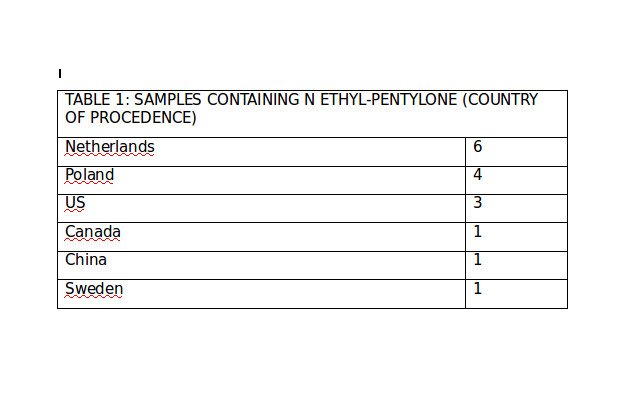 We have not detected any mixtures of N-Ethyl Pentylone with other substances, and no other pill containing this drug.

Available data from Ecstasydata.org (US)  refer 32 samples containing N-Ethyl-Pentylone (March 2016-Apr 2018). Most of them are presented in powder/crystal/dust and were sold as MDMA. There are 6 pills that contained N-Ethyl-Pentylone, generally in combination with other substances. All have been detected in United States.

We have found a pill with shape and logo very similar to the one tested by us. This was found in Vienna (Austria) and tested by Check-it in April 2017, but revealed MDMA as unique active principle. 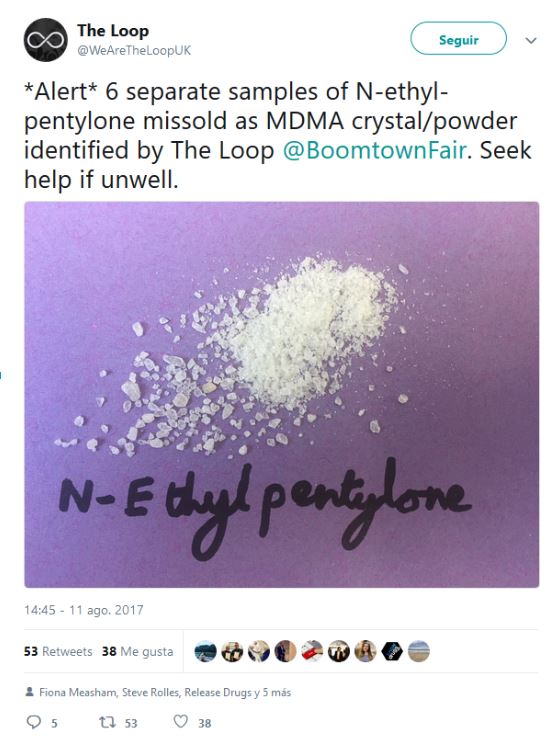 Information provided by The Loop show that that N-ethyl Pentylone is being sold as MDMA, as it was present in 6 samples in which the user expected MDMA. We have not been able to find any pill with this characteristics in the 6 most popular cryptomarkets from Deep Web.

We use cookies to ensure that we give you the best experience on our website. If you continue to use this site we will assume that you are happy with it.Ok